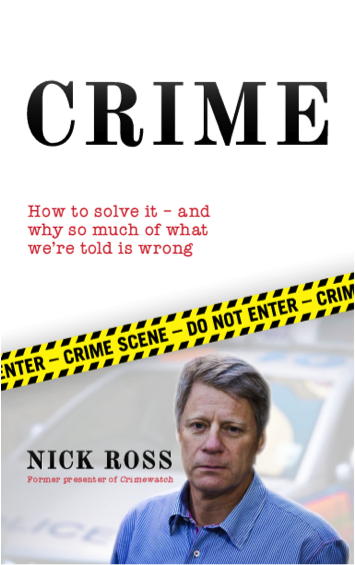 In a whirlwind demolition of dozens of misconceptions about crime, Nick Ross proposes what is arguably the most radical re-think of crime policy since the dawn of policing. Setting conventional thinking on its head CRIME challenges everything we take for granted. Nick Ross demonstrates why the criminal justice system has little effect on crime rates, how policing has been hijacked to serve the needs of lawyers, and how “facts” about crime are continually manipulated to serve the needs of politicians and the media.

This extraordinary book confronts assumptions that crime is caused by poverty or moral decay and instead reveals the true drivers of theft, violence and anti-social behaviour. It explains why crime rocketed and why it has fallen so precipitously. Most importantly, CRIME sets out a wide-ranging strategy for revolutionising criminal and policing policy.

It will delight those who come to it with an open mind and infuriate ideologues from left, right and centre.

Above all CRIME is a book every Home Secretary and opinion-former ought to read.

‘And I thought I’d never see it: a TV presenter developing a deep and thoughtful interest in his subject. Diving beneath the surface where cameras and Autocue cannot follow, Nick Ross explores a theory of crime so simple and universal – and in its way obvious – that it’s almost shocking. He has turned my assumptions upside down.’ – Matthew Parris.

‘A fascinating and beautifully written corrective to the many myths and false legends surrounding the issues of crime and punishment, from fraud to paedophilia. Nick Ross’s book is an evidence-rich zone which our policy-makers – and we the citizens – would do well to spend some time in.’ – David Aaronovitch

‘Hold on to your hats: Nick Ross’s book on crime is actually not bad.’ – Alan White, Spectator

‘Brilliant. Incisive and full of insight, cutting through so much of the nonsense that is talked about crime. A voice of sanity amongst the politicking and posturing that comes with tackling crime.’ – Fiona Bruce

After the Mail on Sunday serialised the book it confected a row by approaching commenters to attack extracts from a chapter about sex crimes. The most important criticisms came from Jo Wood, a former magistrate and science researcher who runs Merseyside’s Rape & Sexual Abuse (RASA) Centre and was awarded an MBE for her work with rape victims. In 2011 she was named the

Cheshire Woman of the Year. Her denunciations were widely quoted a in the Sun, The Times and on the BBC and set off a chain of vitriolic comments in social media.

However, Jo Wood then read the book and (with her permission to quote her reaction) this is her considered response: ‘The book is an extensive study on crime and the causes of crime and has very few references to rape. The excerpts published in the Mail on Sunday have in the main been taken out of context and quoted accordingly. All those responses made by us and others have been made on the basis of “sound bite” quotes which when taken in context can actually read quite differently.’

She then goes through each of the phrases for which I was lambasted. For example:

• “Who is to blame for rape?” This is followed by “It is plainly objectionable to reproach a victim for her own misfortune, so why do so many women do it?”

• “Women who are flirtatious are at least partly responsible if they are raped, and a quarter feel the same way about rape victims who act provocatively.” This is a section quoting the facts discovered by Amnesty International and is not a personal opinion.

• The quote re: “we have come to acknowledge it is foolish to leave laptops on the back seats of cars...” Is followed by “No amount of incitement can ever excuse rape.” This particular section is actually making the case for rape to be looked at differently and thought about differently “it is inane to confuse explanation with justification.”

• The rape is rape section – gradations of rape – on reading the whole chapter it is apparent that the point is that victims themselves do not always see what happened to them as rape because rape is most commonly presented as strangers down dark alleys.

And so it goes on.

‘Maybe they should think about who is fast becoming the victim here – and without even holding a trial. Having read the full version I am satisfied that there is no intention to criticise victims of rape and that the comments made, when read in context actually strengthen the arguments for sexual violence crimes to be treated with the empathy and respect that victims demand. I would seriously suggest anyone who still supports the furore that has broken out – takes time out to READ THE BOOK.’

After the Mail on Sunday row broke many rape victims contacted me, most to offer support. Two were hostile but when I replied they apologised and promised to read the boom rather than react to how others had reacted.

This email came from a woman who deeply resents ‘the madness’ and ‘the rants’ that drown out voices like her own:

‘I was raped twice in my teens. Neither were traumatic experiences. I didn’t feel great about myself afterwards but I put myself in situations where there would certainly have been confusion/ambiguity on the man’s part in my desires. It was to do with my generally low self-esteem at the time, but that was my problem, and not theirs’

One yearns to address the lack of self-esteem which led her to this view of herself, but voices like hers must not be ignored. Of course hers might be a minority view. But that’s the point: victims refuse to submit to a stereotype.

Another woman, who was forcibly raped by a man she knew well, emailed:

‘It sits there in my memory, and rears up and bites me when I least expect it… but the act did not blight my life, leave me traumatised [or] afraid of men. Nick is right. Tell him so please, and long may he continue to say what he thinks. I have rarely admired a journalist more,’ adding, ‘He is welcome to use my tale as he sees fit.’

‘In company with most people I’m getting irate about this story. I am a victim myself and I certainly see the variations between what I experienced and what other victims in other situations might experience. It is a great shame we can’t talk seriously about the very real problem of rape because any comment that isn’t baying for the blood of all offenders everywhere is screamed down. The vitriol makes sensible discussion impossible.’

After the predictable outcry the Mail on Sunday offered me a right of reply. This was then sneakily squashed beneath a concocted story headlined Fern Britton hits back at Crimewatch founder’s book  Fern had not read the book and, so far as I know, has no criticisms of my views.

It’s odd how even Guardianistas, who claim to revile the Mail, believe what it says and allow it to set their agenda. Of all the ignorant attacks on me one of the classics was a bizarre column in The Guardian by Martin Robbins who describes himself as a science writer but who does, or did, no original research and seems led by the nose by the confections of the Mail on Sunday.

He had plainly not troubled to read the book, which is odd for a man who claims to be an exposer of pseudoscience. He did not even bother to look me up online, in which case he might have discovered that I have been doing twenty years what he merely claims to do as a campaigner for good science, as a member of the Committee on Public Understanding of Science, twice chair of the Science Book Prize, Guest Director of the Cheltenham Science Festival, President of the quack-busting charity HealthWatch and a Board member of the leading organisation for tackling scientific myths, Sense About Science. Nor did he bother to look at the website devoted to the book which lists thousands of references on which each assertion in the book is based. Instead he opines that any ‘truths’ in the book had been, ‘learned from his career as a television presenter’.

Oh dear. His whole article is essentially a rant. He airily criticises my, ‘clumsy use of statistics to suggest that men are equal victims of domestic violence,’ without explaining why the several pages of evidence I cite is in any way wanting of rigour or precision. Presumably he was in too much of a hurry to check.

He says the book claims ‘provocative clothing’ is a cause of rape when in fact, of course, it says no such thing. In fact it draws almost the opposite conclusion pointing out that, despite the routine nature of nights on the binge, so-called stranger rapes are relatively rare.

He too recognises that, ‘The average rapist is not a stranger in a ski mask, hiding in the bushes.’

But he then seeks to ridicule me for wondering whether formal prosecution is always the most rational way to deal with rape:  ‘Given what we know about predatory behaviour, the grooming and manipulation of victims, and the ability of serial rapists to remain undetected, it’s one of the most stupid questions you could possibly ask.’

Excuse me, didn’t he just concede that the average rapist is not a stranger, but is known to the victim? This is why it is agonisingly hard, often prohibitively hard, for victims to go into a public court to air the matter. And this is why so many cases lack the sort of evidence that is likely to persuade a jury to convict. And this is why, if courts are our only answer, so many women are failed by our approach.

Mr Robbins then attributes a whole range of motives to rapists which are largely a fantasy on his part, applicable only a small cohort of offenders, before triumphantly, but idiotically, suggesting that I am proposing men cannot help themselves –  in what he calls the myth of the self-guiding penis. I make precisely and emphatically the opposite case.

In doing so I have been supported by many rape victims, and by my first critic – a brilliant rape victim support worker from Merseyside who was recruited to attack me by the Mail but who, having read the book, now endorses it.

If there is really a self-guiding penis out there Martin Robbins might be it.